Ling Zhou is one of the presenters in King of Bots throughout the first season. Throughout her appearances, Ling Zhou wore tight black lycra with red stripes, and a large golden earring, and was never seen without her microphone and cue cards.

Ling Zhou was present inside and around the King of Bots Arena, offering her a different presenting role to hosts such as Jet Li and Roach. Her role was seemingly inspired by the BattleBots ring announcer Faruq Tauheed, as she would introduce both competing robots as they entered the arena, and offer them a personalised introduction, generating hype before a battle.

After a battle was completed, Ling Zhou would typically interview the winner and occasionally the loser by the side of the arena, if a win by knockout was achieved. In the cases of a Judges' decision, it was the responsibility of Zhou to announce the winner of the battle and congratulate the victorious team.

In some instances, Ling Zhou would speak to competitors in English after the battle, including the teams of The Grubs and Crossfire. 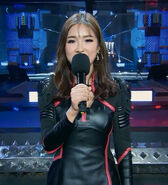 Ling Zhou in the arena 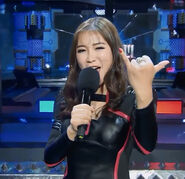 Ling Zhou introduces WU66, with the hand gesture for "six" 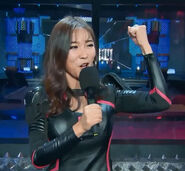 An example of Ling Zhou introducing a robot, with a flex

Ling Zhou declares a victor of a battle
Add a photo to this gallery
Retrieved from "https://king-of-bots.fandom.com/wiki/Ling_Zhou?oldid=2518"
Community content is available under CC-BY-SA unless otherwise noted.